Beginning tomorrow, and proceeding up to Christmas Eve, the “O” antiphons for the Magnificat are sung during vespers.  (The texts of these antiphons are the basis for the popular Advent hymn, “O Come, O Come Emmanuel.  For those of you who really want to be “inside baseball” on this topic, Jeffrey Tucker wrote a brilliant article on the history of the tune over at the New Liturgical Movement, here.)

Several years ago in a discussion thread at the Musica Sacra forum, a member pointed out that the text of the “O” antiphons is actually a very clever word game.  The seven invocations in the original Latin are: Sapientia, Adonai, Radix Jesse, Clavis David, Oriens, Rex gentium and Emmanuel.  The first letter of each spell S-A-R-C-O-R-E, which when reversed spells “Ero cras”, which in turn translated from Latin means “tomorrow I shall be.”  An appropriate expression for Christmas Eve, the day after the "O Antiphons" end.

As the member said, “Very clever, those medievals.”

(The Icon of "Our Lady of the New Advent: Gate of Heaven" is (c) by William H. McNichols, from St Andrei Rublev Icons. My thanks to them for kindly granting permission to use it here. Please visit the site for other beautiful art.)
Posted by David Saunders at 10:53 AM No comments:

A Sacred Musician Reports From the Trenches

A colleague of mine took a job in Arizona last summer.  He's a talented and ambitious young sacred musician, fully committed to the restoration of orthodoxy to the culture of the Catholic Church in the 21st century.

I've been disturbed by reports he's been posting to Facebook, complete with photos of "hate mail" he and his Pastor have received in reaction to the work he's doing.

Here are some examples: 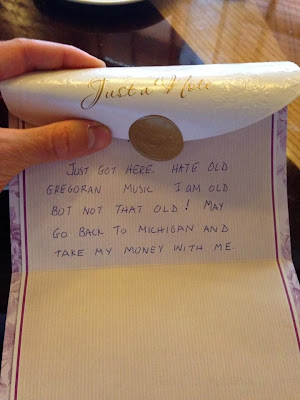 It's truly amazing that people would write such hateful, ignorant, manipulative stuff.

What is more amazing is that since the reforms of the Second Vatican Council were implemented, the Catholic Church has tragically lost so much of what made its cultural identity unique.  The "leadership" of the Church incredulously wrings its hands and wonders out loud why there's a crisis of faith and a crisis of vocations to the priesthood and religious life in the face of growing numbers of young people joining religious orders and pursuing priestly vocations associated with Magisterial fidelity and orthodox liturgical practice.  But that's for another time.

What is important, and what impressed me, was my friend's response in the Facebook discussion thread regarding the typewritten note.  They were words I needed, and not because I'm facing obstruction or resistance anything close to this kind of vitriol.  They were needed because those of us who are committed to this cause are easily dispirited in the work we've undertaken when faced with such selfishness.

These letters really don't bother me. We're called to be faithful, not successful, so I shall try to stay faithful in carrying out my mission. The rule of thirds is applicable at my parish, I believe. ⅓ of the people will like you, ⅓ won't, and ⅓ won't care.We simply have to do the right thing and trust in God. The sacred liturgy is Christ's work, not ours. The liturgy is not something we do, it's something that God is doing in our presence. It is not for cardinals, popes, bishops, or any of us, to do things with the liturgy. Rather, it is our privilege and duty to join in the liturgy as it has been handed on to us and to allow it, to allow Christ working in and through it, to do things with us!

If your music director is working to reclaim our unique Catholic identity as expressed in orthodox musical practice, thank him or her for their commitment and let your Pastor know that you appreciate the work the music director is doing as well!

Pastors often only get  rambling emails, viturperous voice mail messages or noisome green-ink letters like the ones shown above.  And some, out of a sense of desperation or frustration, err on the side of compromise in the one area that they feel they can, without violating Church Teaching, in the name of pastoral sensitivity.  They need to know that the efforts to restore chant and polyphony to the Mass are worthwhile, and that people (who take their faith seriously) do want reverent, prayerful, and truly Catholic music in their liturgical celebrations.  They also need to know that sacred musicians are not just temperamental egoists who do what they do for personal adulation or who make their choices based on effete and eccentric tastes.  Truly educated sacred musicians understand that the Mass and its music are part and parcel of an unbroken tradition.  Priests need to understand that the cultural battles of our time go well beyond the cries for same-sex marriage, ordination of women and the evils of abortion and contraception.

Support your sacred musician, and let your Pastor know that you appreciate what he or she is doing!
Posted by David Saunders at 3:12 PM 1 comment:


In 2008, prompted by a thread over at WDTPRS to "keep" Advent as a penitential and preparatory season in anticipation of Christmas, I began establishing my own traditions that would do just that.

Here's how it works.

I have finally created a nice Advent wreath (artificial greens, as alas I’m an apartment dweller and don’t wish to risk the fire hazard) with the traditional candles (three purple, one rose).

A tree (again, artificial) goes up with white lights, but instead of Christmas ornaments, the tree is decorated with purple ornaments and a few rose-colored ones.  Some of them have gold decoration on them. The tree is topped with a large purple bow. I also have a swag of greens with white lanterns, pinecone lights and a big purple bow hanging over the chest with the Nativity set arranged on it (in stages, which is explained below).

I abstain from listening to Christmas music at home, limiting myself to the few recordings of Advent music I own (a recording of the Advent Procession from St. James' Episcopal Cathedral, Toronto, and J. Michael Thompson and the Schola Cantorum of St. Peter the Apostle singing Advent Lessons and Carols, called, "Redeemer of the Nations, Come").

On the morning of Christmas Eve, the purple and rose ornaments will come down and the Christmas decorations will go up on the tree, over the door and elsewhere in the apartment.

Of course all of this would be for naught if prayer didn't figure into the picture.  I'll be the first to admit that I have for some time been in a bit of a spiritual "dry place", but I have resolved to regain my spiritual bearings during this month of preparation.

Here are some pictures of the tree and the Nativity arrangement. (The picture of the wreath was taken last year.) 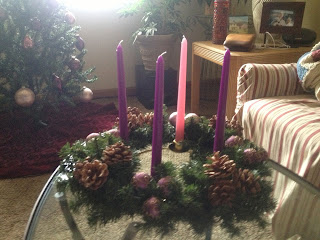 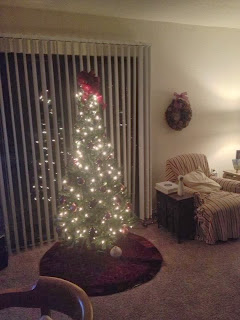 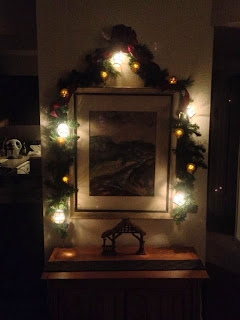 Posted by David Saunders at 2:18 PM No comments: